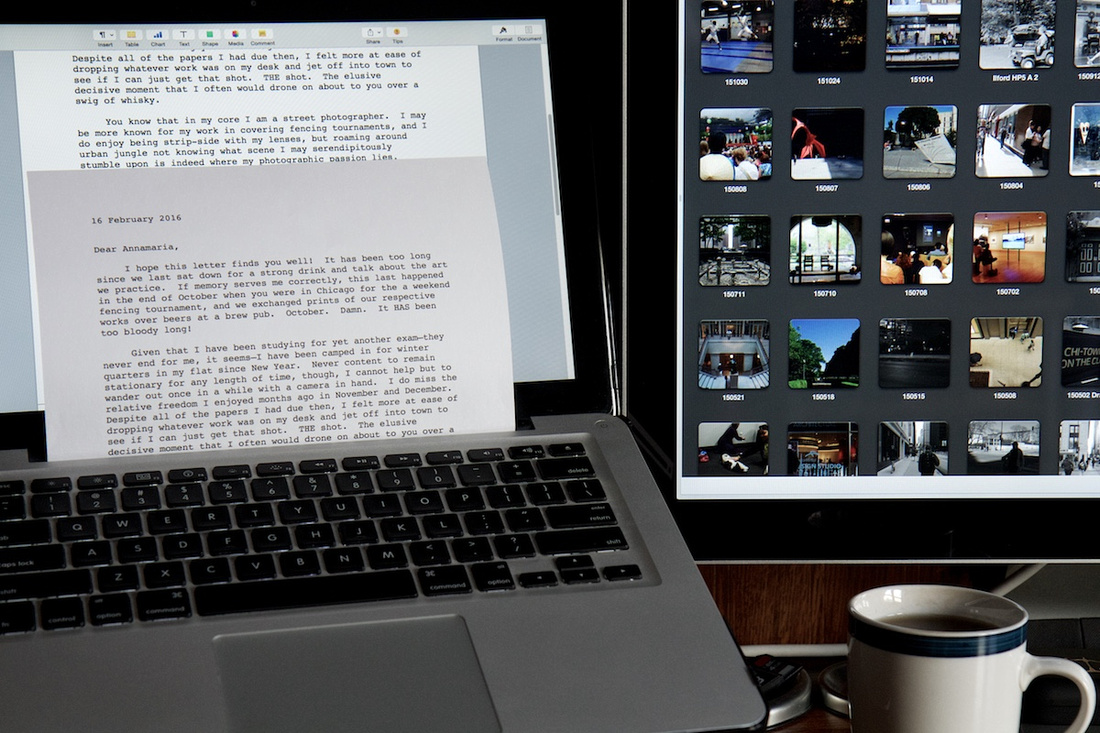 The following is an open letter to my friend and fellow photographer Annamaria.  Annamaria took up the photographic arts over a year ago.  Seeing a few of her early images, I noticed that she possessed a natural talent despite the lack of formal and technical training.  With proper encouragement and tutorage, I foresaw her becoming a very skilled artist.  And so I took it upon myself to train her as I had trained myself years ago, by bringing her out to the streets of Chicago and roam around with a camera in hand.  Although she had moved away only months after I began mentoring her, she has continued her photographic pursuits and indeed has excelled since.  Although I continue to occasionally give her technical advice through our correspondences, I see her more as a colleague now than protégée.

I hope this letter finds you well!  It has been too long since we last sat down for a strong drink and talk about the art we practice.  If memory serves me correctly, this last happened in the end of October when you were in Chicago for the a weekend fencing tournament, and we exchanged prints of our respective works over beers at a brew pub.  October.  Damn.  It HAS been too bloody long!

Given that I have been studying for yet another exam—they never end for me, it seems—I have been camped in for winter quarters in my flat since New Year.  Never content to remain stationary for any length of time, though, I cannot help but to wander out once in a while with a camera in hand.  I do miss the relative freedom I enjoyed months ago in November and December.  Despite all of the papers I had due then, I felt more at ease of dropping whatever work was on my desk and jet off into town to see if I can just get that shot.  THE shot.  The elusive decisive moment that I often would drone on about to you over a swig of whisky.

You know that in my core I am a street photographer.  I may be more known for my work in covering fencing tournaments, and I do enjoy being strip-side with my lenses, but roaming around an urban jungle not knowing what scene I may serendipitously stumble upon is where my photographic passion lies.  This is why in my most recent commissioned shoot—engagement portraits for a couple in January—I suggested downtown Chicago as the backdrop. 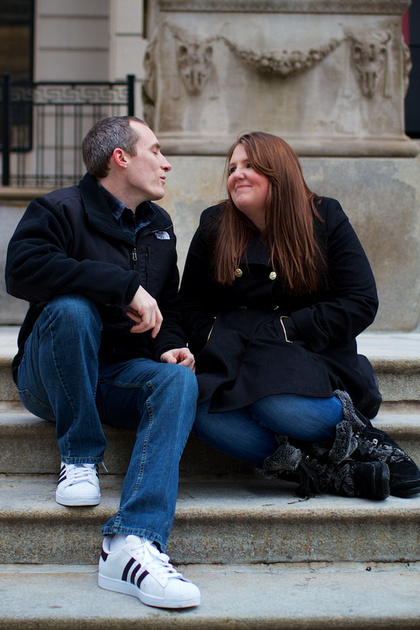 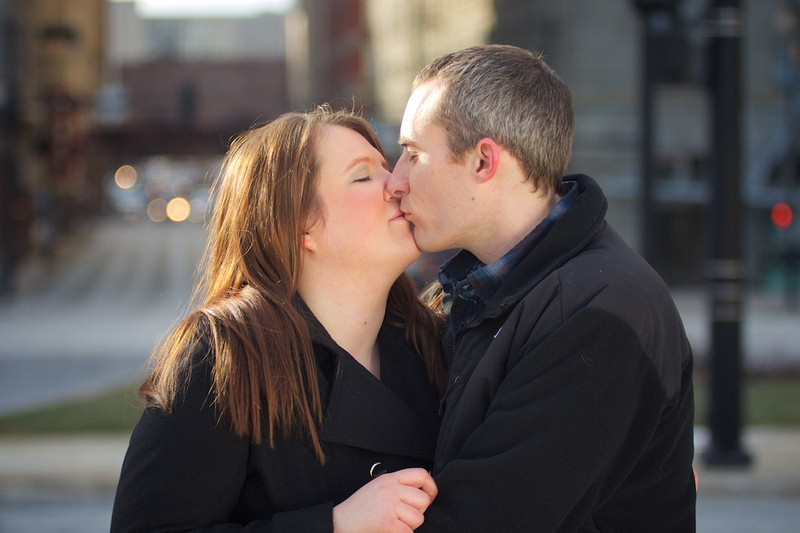 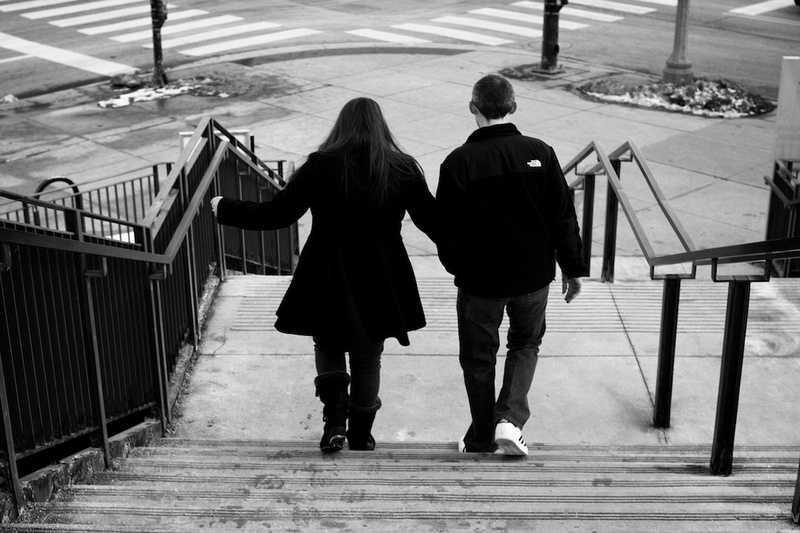 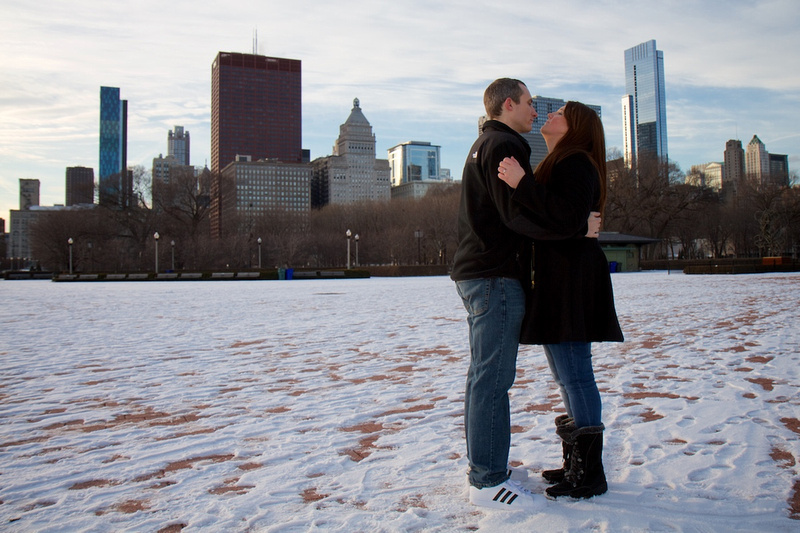 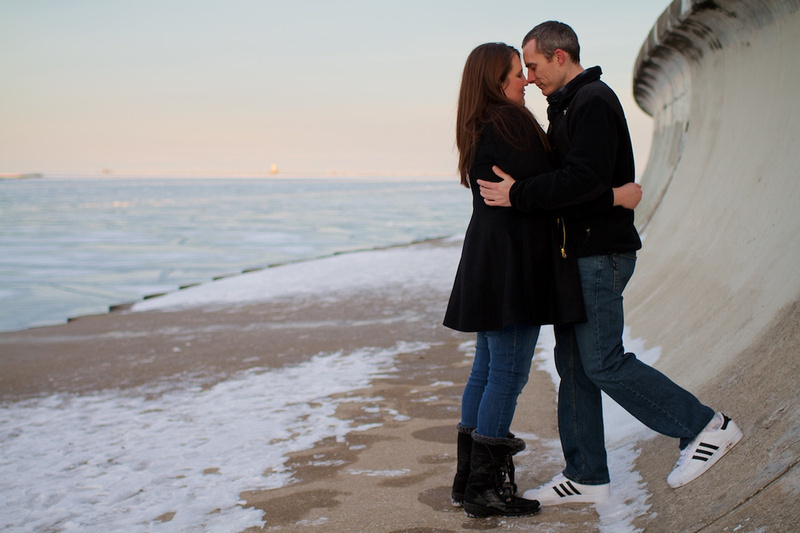 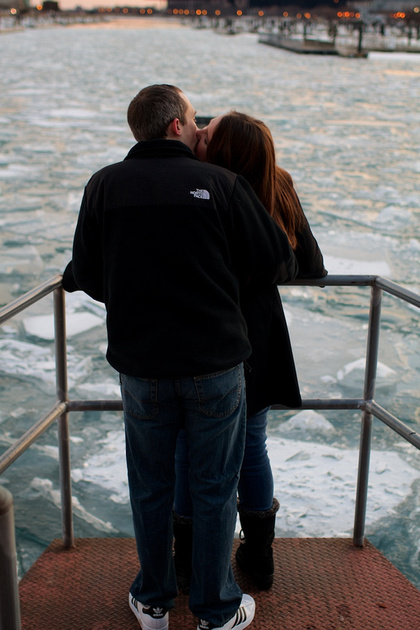 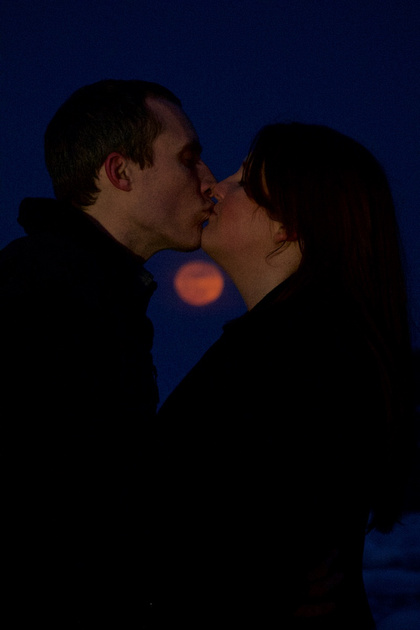 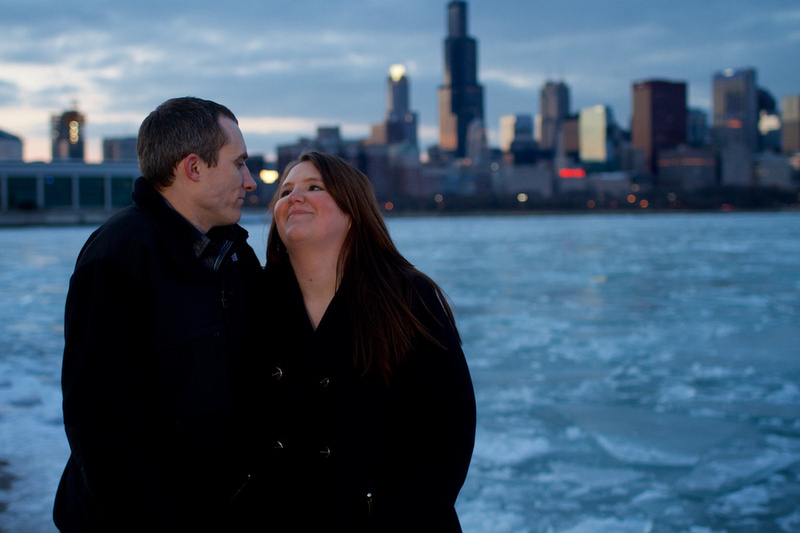 Admittedly, I was playing it safe.  Downtown is very familiar to me, perhaps too familiar.  You know too well how much I detest the banal and ordinary, and so will often try to do something different, something that is not typical.  But given that I did not have the opportunity to meet this couple for an in-person consultation and collaboration until the day of the shoot, I figure that familiar ground would be a wise choice.  That way, I could concentrate on sizing up the couple’s personalities and, on the fly, direct them in frame to better bring out their character.  As you know, a portrait should not merely show the subject’s superficial likeness but convey something deeper—a story, character, soul.

Of course, I do much of my work downtown.  I have said before that to my eyes, downtown Chicago is a theatre stage showing a different play every day.  The storyline differs; some characters are the same, some are new, some take on a different form.  Although the stage and set pieces are the same, the story is always changing.  It never gets boring.  There is always a plot twist here and there. 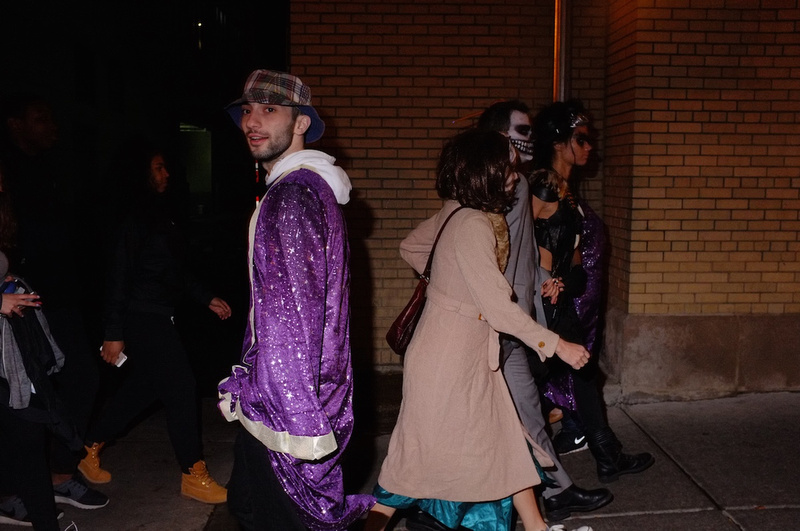 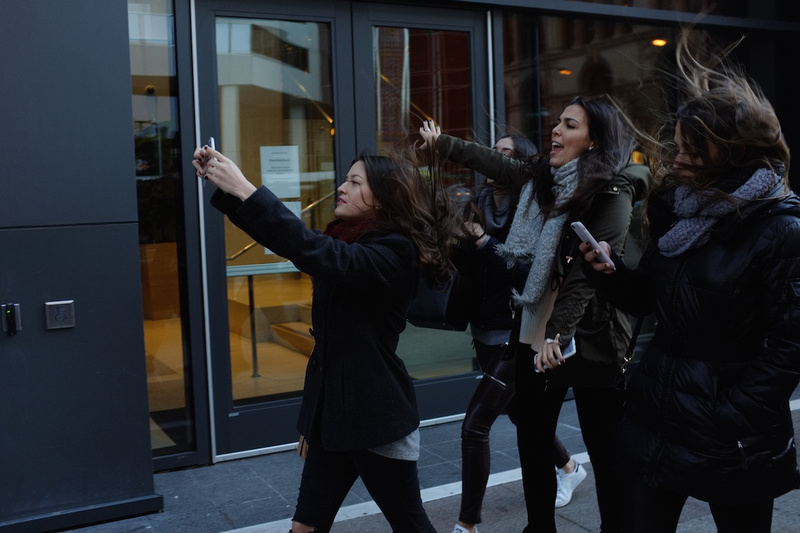 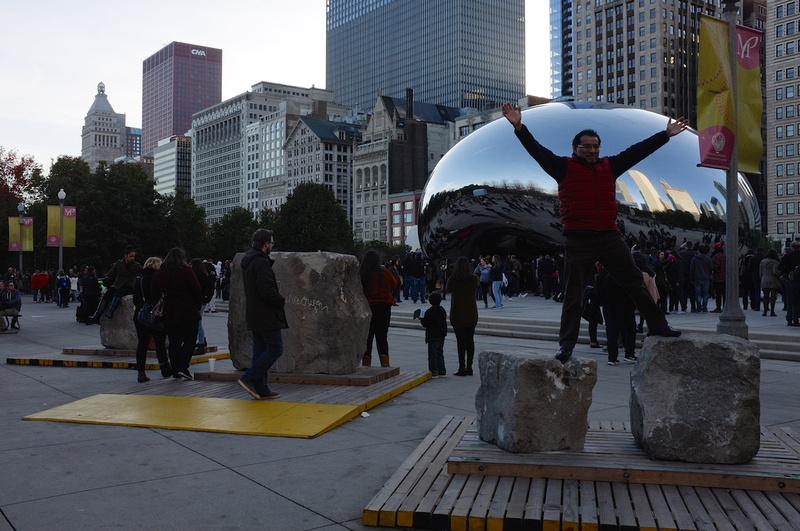 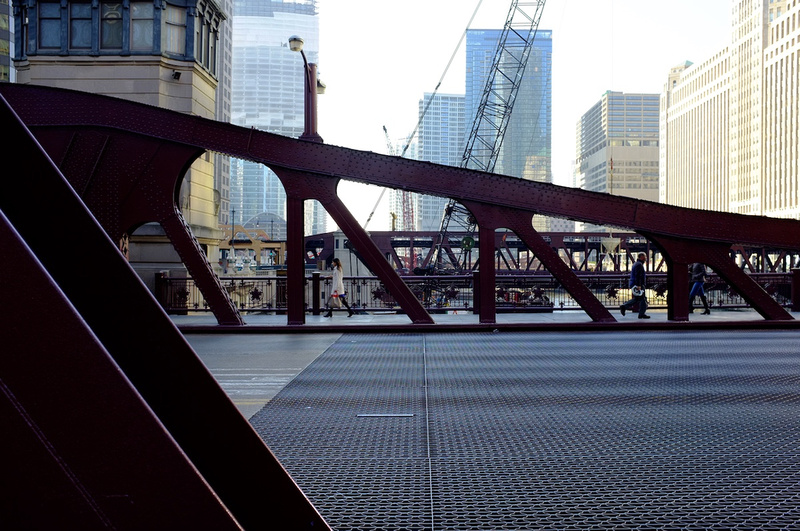 One of the stories on the Chicago stage that I came across in December taught me the difference between pure photojournalism and artistic street photography.  While both fall under the general auspice of reportage photography—observational and non-interfering—photojournalism does not allow for the freedom in artistic expression and commentary found in street photography.  A photojournalist’s job is to report what is happening.  Indeed, as a duty, a journalist in general seeks out events to truthfully and objectively record and present to the public.  A street photographer is not bound by such duty and so has more subjectivity and leeway in what to present or not present.

By mid November, Chicago became a political and social powder keg.  You might say that it usually is.  You know that I consider myself a moderate on the political spectrum, a range that appears to have less of a place in these days of far extremes.  I also have a personal policy of political neutrality in my public speech.  It is all too easy to loose objectivity and rational thought in a political discussion, especially these days.  Even when the intent is to merely report, the reported event itself can become perverted to serve some means.  And so when I stumbled upon a Black Lives Matter protest at State and Washington Street on an early December evening with a rangefinder slung over my shoulder, I uncharacteristically hesitated.  One of your favourite photographers, Martin Parr, is noted to have once said, “All photography is propaganda.”  I found the thought of tossing more gasoline into the inferno an affront to my political neutrality stance.

Despite my initial hesitation, it was not long before I brought my rangefinder to my eye, framed, focused, and photographed.  Regardless of my own views, I felt that I could not ignore the opportunity to capture something as such.  I could not say that such an event was unusual at the time; between Thanksgiving and Christmas, protests were occurring throughout the city on a daily basis.

This brings me to why I now know I cannot be a photojournalist in the purist sense but rather am a street photographer in the artistic sense.  A photojournalist would have displayed these images immediately despite the risk of swaying the public.  News becomes old and stale after the sun rises the following day.  As objective as a journalist may depict an event, there is always the risk that another will twist it to serve some agenda.  I could not bring myself to show those images so timely.  My political neutrality stance is one thing; I did not want to contribute to the fiery atmosphere, nor did I wish my work to be contorted into a propaganda tool.  But I also felt it would have been dishonest of me to exploit the climate for my own artistic gain and social media Likes.  My motivation to make those images on that evening was more aesthetic than objective reporting.  I wanted to tell a story of conflict and unrest in those frames.  I wanted to show a human trait, that despite our common goal should be one of peace and cooperation, we are all too prone towards conflict.  And that is it. 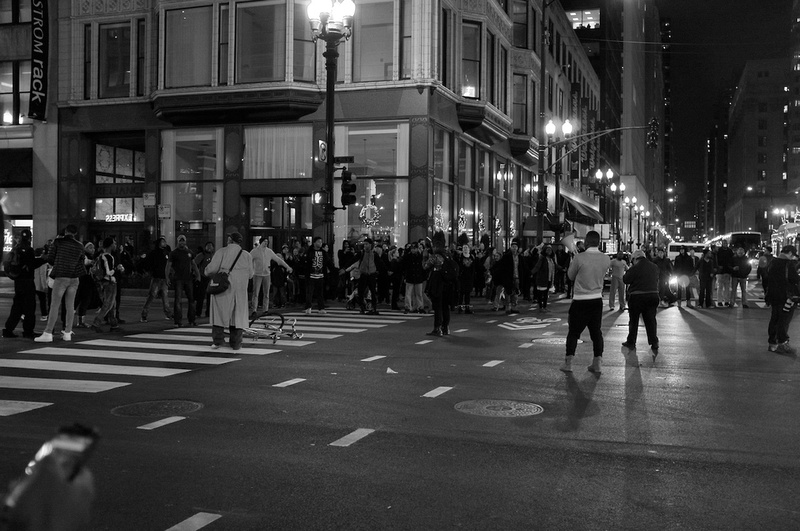 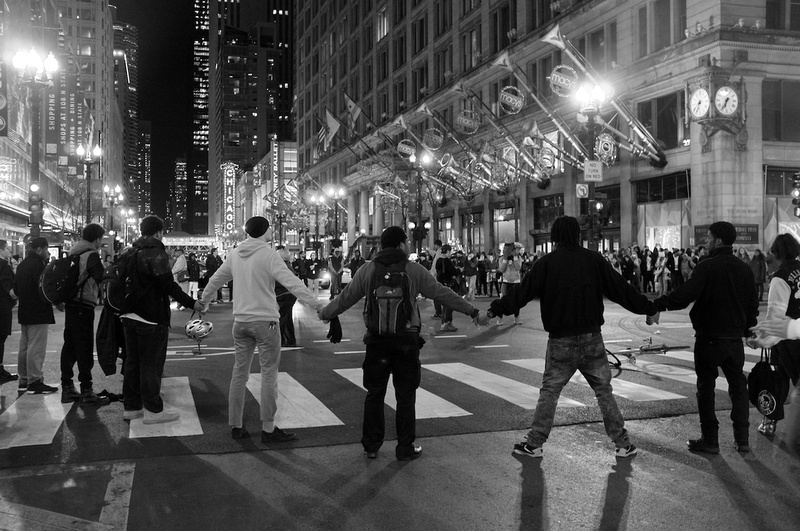 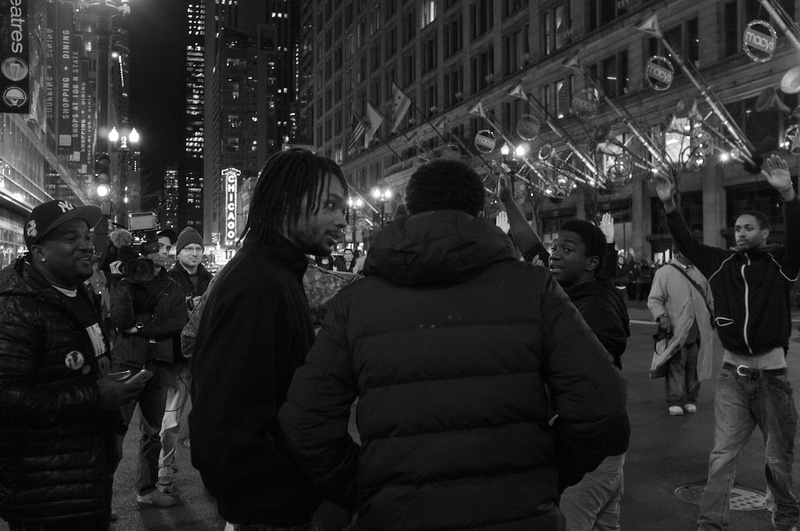 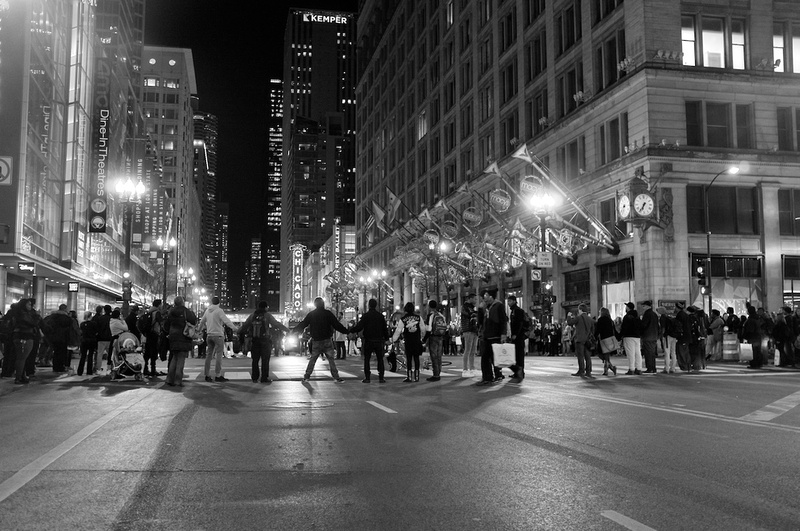 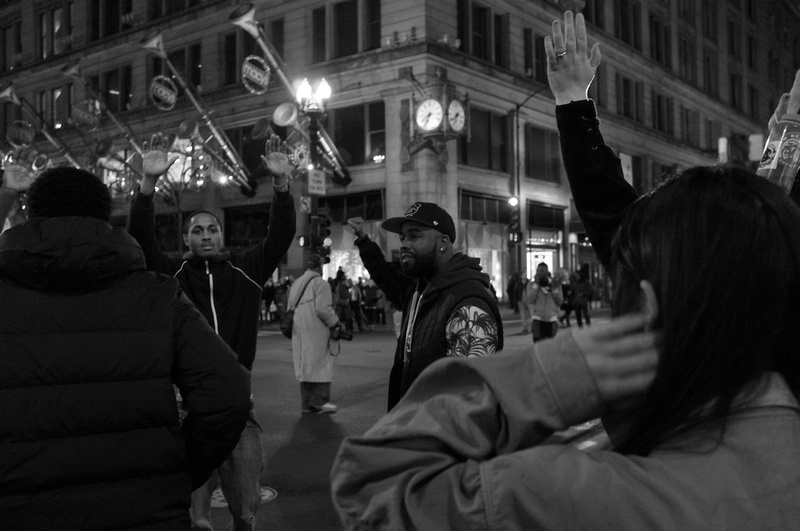 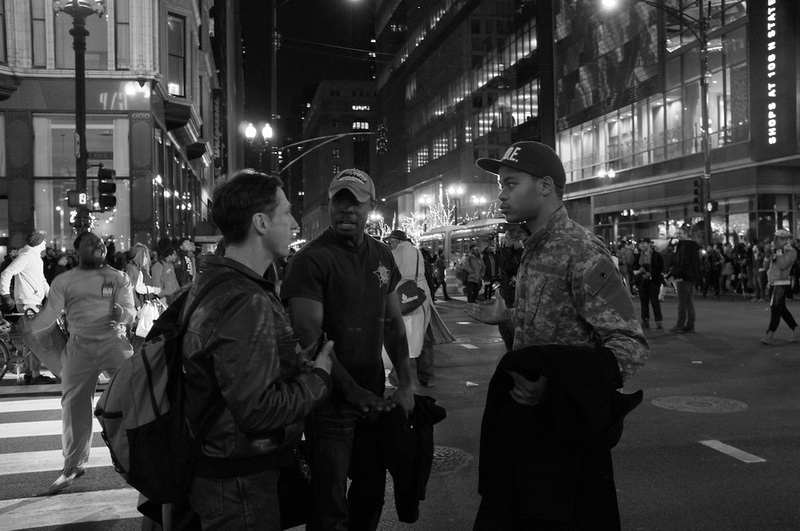 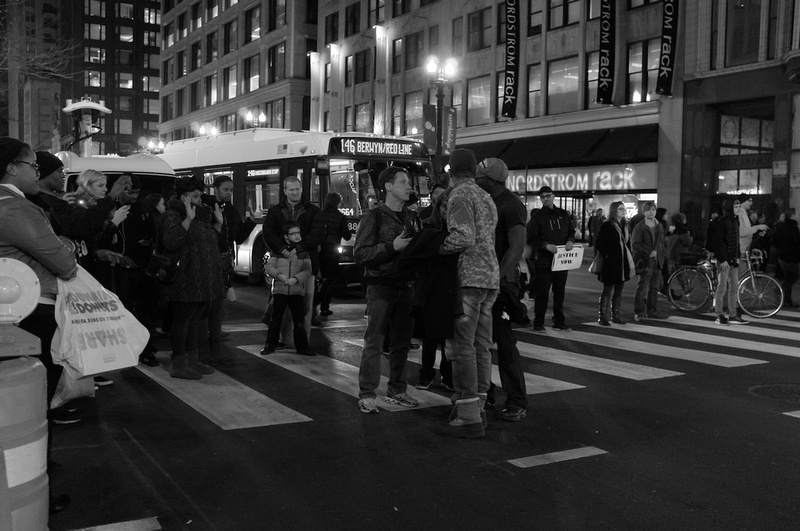 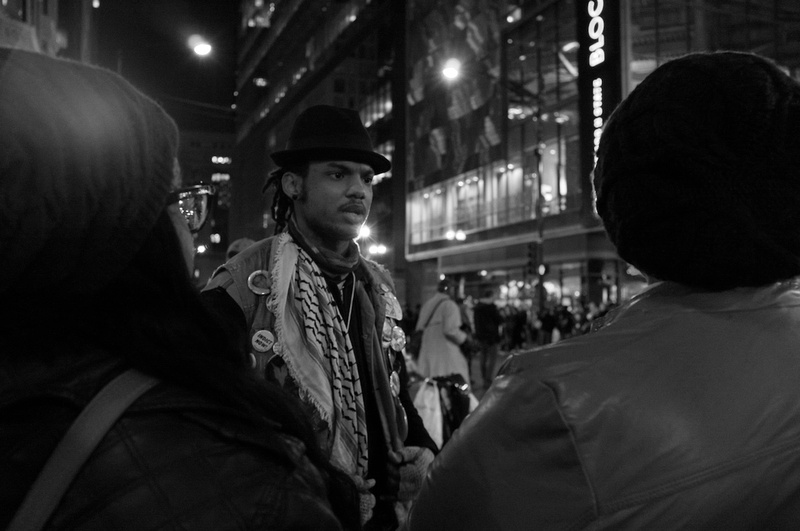 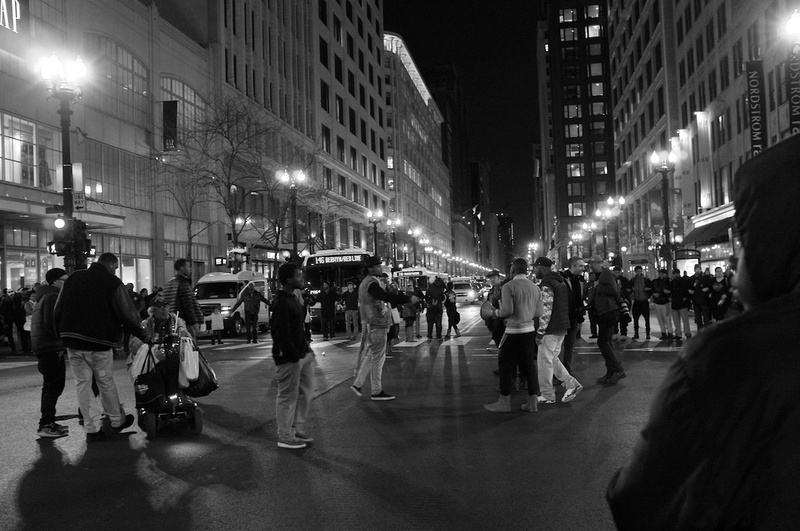 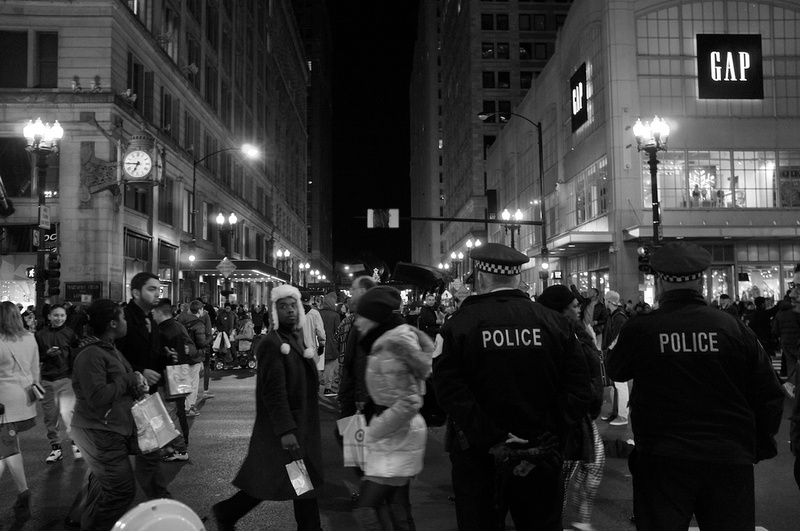 It has been months now, and the protesting has died down a bit in the city.  People seem to be more concerned with the weather stabilizing and spring to arrive.  I myself am looking forward to March to for various reasons.  As well as roaming the streets looking of that decisive moment, I am hoping to return to covering fencing tournaments.  The last time I shoot a tournament was the Windy City Fencing SYC and Cadet before Christmas.  Although the last two tournaments that I was commissioned to shoot were rather physically taxing, I do miss jumping from one strip to another, ducking and dodging épéeists flèching right towards me.  I cannot say that I miss the Clif Bar rations, although Culver Academy indeed fed me a proper lunch when I covered their high school open in early December.  I really should include a meal clause in future dealings. 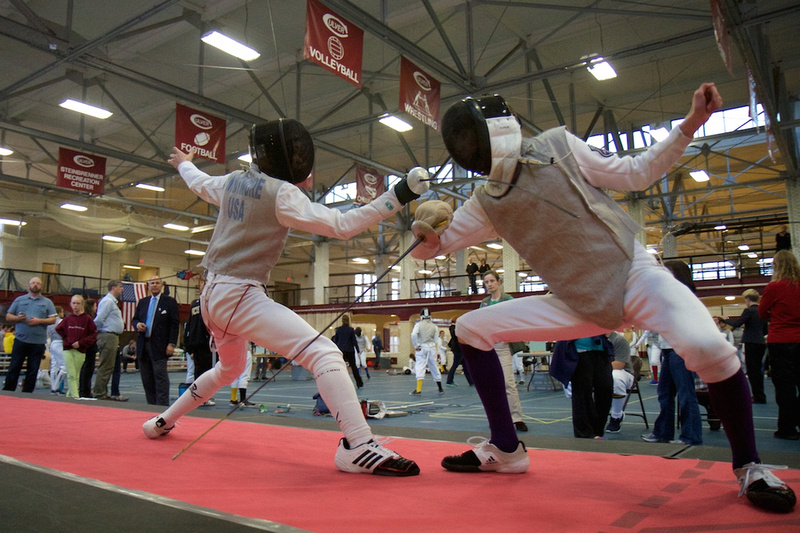 From the Midwest High School Open at Culver Academy, 12 December 2015. 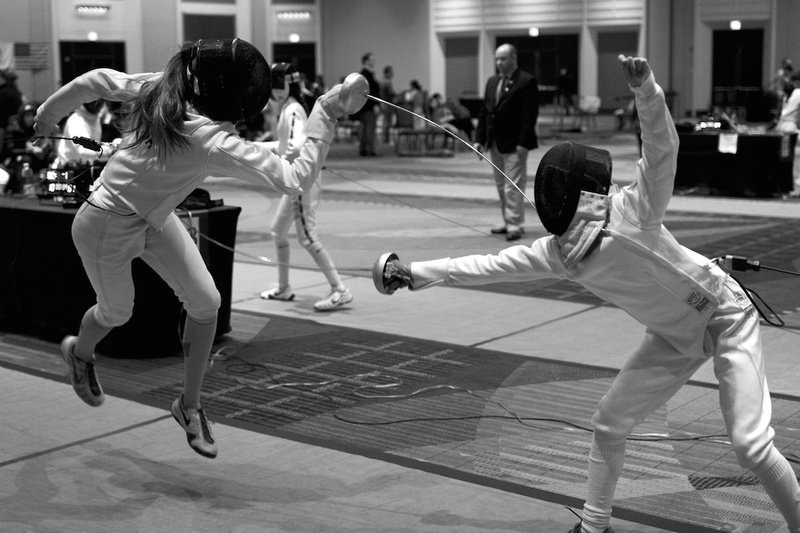 Hopefully, time will allow us to once again to sit down over a drink and go over our recent works.  I am very interested in seeing how much you have progressed since October, especially given how much of a natural eye you have for photography.  Even better would be to once again go on our street walks with our cameras and hunt for that elusive decisive moment.  Preferably in better weather than last time, though. 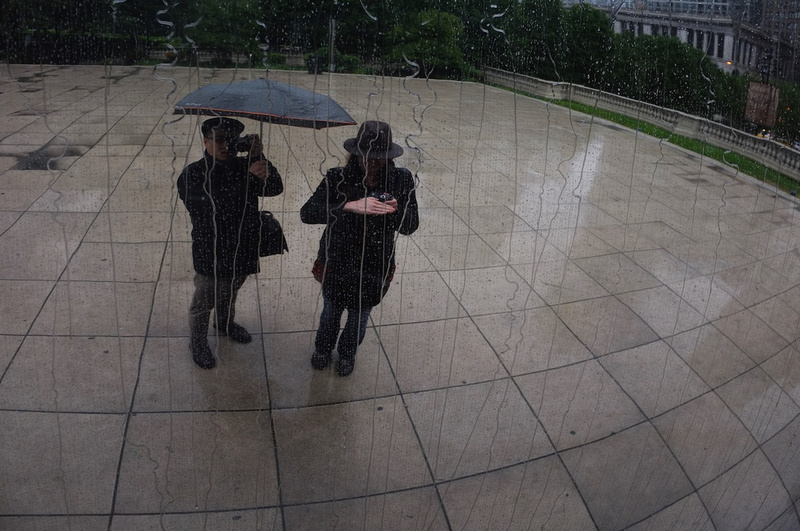 Your friend and colleague,